The Logix Smart™ ZDC (ZIKV-DENV-CHIKV) Test kit uses our patented CoPrimer™ technology to differentiate between the ribonucleic acid (RNA) of Zika, dengue (all 4 serotypes), and chikungunya viruses and to detect and amplify regions of the viruses’ genomes.

The test operates using a single step real-time reverse transcriptase polymerase chain reaction (RT-PCR) process in serum samples, collected alongside with urine, from patients suspected of being infected with Zika, dengue, or chikungunya. The Logix Smart ZDC kit is designed and validated to identify Zika, dengue or chikungunya viruses even when more than one target is present, such as in co-infections. The presence of one target does not interfere with detection of any other targets. If a patient specimen is positive for Zika, a CSF specimen can also be collected to search for neurological infection.

Zika virus testing is essential to aid the control and spread of the virus prior to pregnancy, transfusion, transplantation, or sexual relations. Like Zika, dengue is a mosquito borne-viral infection spread by the daytime-active Aedes mosquito species A. aegypti and A. albopictus. Severe dengue is a leading cause of serious illness and death among children in some Asian and Latin American countries. There is no specific treatment for dengue/severe dengue, but early detection and access to proper medical care lowers fatality rates to below 1%. Chikungunya infections can also be severe, especially for young children and the elderly. However, therapeutics differ for the three diseases, and physicians require accurate diagnostic tools that can detect and distinguish between the viruses in order to determine the most appropriate treatments.

The Logix Smart ZDC Test Kit is intended for molecular biology applications to aid in the differentiation and diagnosis of Zika, dengue, and chikungunya in human serum and urine specimens. It is recommended for serum to be collected alongside a urine sample.

This product is for export only and is not for sale in the United States.

The Logix Smart ZDC Test was designed and validated as a real-time RT-PCR kit that targets and differentiates between conserved regions in the genomes of the three pathogens. 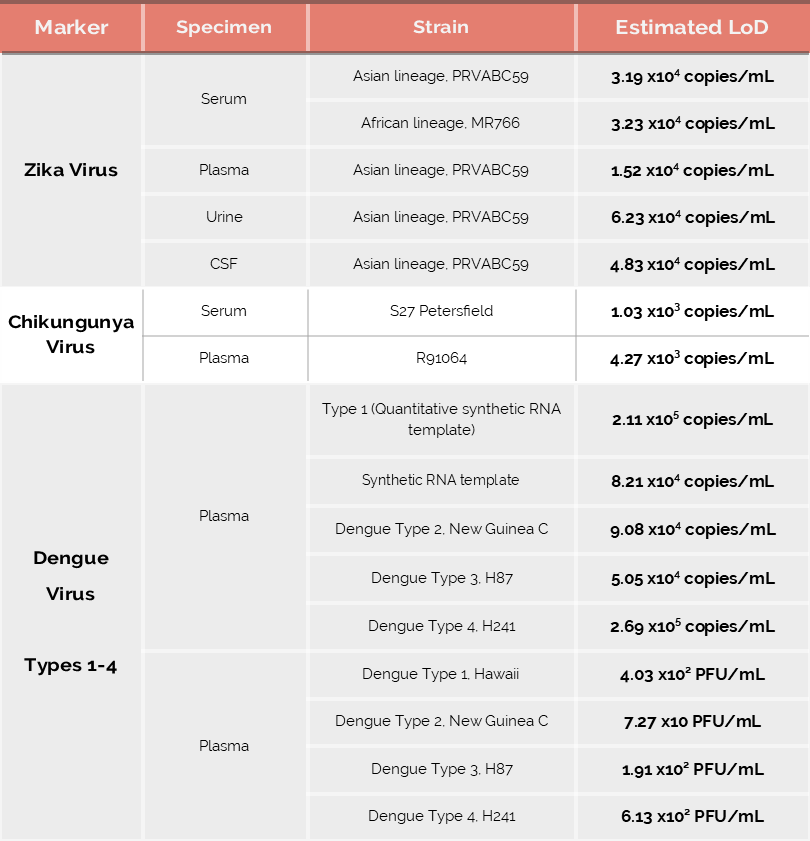 Instructions for Use can be found under the Resources tab.

In March 2019, the Logix Smart ZDC Test kit received CE mark approval, the principle regulatory clearance allowing the test to be sold as an in vitro diagnostic (“IVD”) for the diagnosis of Zika, dengue, and/or chikungunya in European Union states and other markets that accept a CE-IVD marking as valid regulatory approval.

Zika virus (ZIKV) is a Flaviviridae family virus. It is spread by daytime-active Aedes mosquitoes, such as A. aegyptiand A. albopictus. The virus was first isolated in 1947 in monkeys and is named after the Zika Forest in Uganda. In 1952, the first human cases of Zika were detected and since then, outbreaks of Zika have been reported in Africa, the Americas, Asia, and the Pacific. Zika outbreaks have probably occurred in many other locations. Because the symptoms of Zika are similar to those of many other diseases, many cases may not have been recognized or properly reported.

In 2015, following increased reports of suspected Zika infections in Brazil, doctors also reported a striking increase in congenital microcephaly cases. Before its emergence into the public consciousness in 2015, Zika virus was not thought to be endemically transmitted in the Americas. Since that time, the World Health Organization (WHO) declared Zika to be an international public health emergency, and it has spread across South and into North America, including the Caribbean.

Studies conducted in Brazil following the initial outbreak found direct correlation between microcephaly cases and Zika occurrences, and helped solidify the link between fetal ZIKV infection and the development of microcephaly (Relich & Loeffelholz, 2017), as well as the link between ZIKV infection and the neurological disorder Guillain-Barré syndrome in adults. Due to the Zika disease’s serious neurological sequelae, in 2018 the WHO issued the Annual review of diseases where the priority for R&D investments for Zika has been raised. While public awareness may have lessened since 2015, the WHO also confirms that need to identify and protect against Zika transmission and potential future should still be addressed in a sustained, persistent manner among communities experiencing the virus.

Given Zika’s ability to be passed along via sexual transmission in addition to mosquito vectors, the key component to preventing the spread of the disease is an early, accurate, and affordable diagnosis for both men and women.

Like Zika, dengue (DENV) is a mosquito borne-viral infection spread by the daytime-active Aedes mosquito species A. aegypti and A. albopictus. Dengue fever is a flu-like illness. There are 4 genotypes/serotypes of dengue virus (DENV1, DENV2, DENV3, and DENV4). Immunity is acquired for long periods for each type, although the immunity to one type does not prevent the infection from the other types. In hyperendemic areas, infection of dengue virus is as frequent as up to four times per individual. The illness spectrum varies from asymptomatic, classic dengue fever, and severe or hemorrhagic dengue fever, which can be fatal (Wilder-Smith & Gubler, 2008). Halstead & O’Rourke (1977) proposed that the severe dengue condition could be caused by an antibody dependent enhancement (ADE) response where the antibodies acquired in a previous infection enhances the immune response to following infectious causing dengue shock syndrome, which can be fatal.

Severe dengue is a leading cause of serious illness and death among children in some Asian and Latin American countries. There is no specific treatment for dengue/severe dengue, but early detection and access to proper medical care lowers mortality rates to below 1%, compared to some estimates which conclude that the mortality rate without diagnosis and treatment can be as high as 50%. Dengue prevention and control also depend on effective vector control measures. The global incidence of dengue has grown dramatically in recent decades and about half of the world’s population is now at risk. Dengue is found in tropical and sub-tropical climates worldwide, mostly in urban and semi-urban areas. (World Health Organization, 2018). The Americas are a hyperendemic region for dengue. In 2010, of 1.6 million reported cases of dengue, 49,000 were severe-dengue (Murray, Quam, & Wilder-Smith, 2013).

Like Zika and dengue, chikungunya (CHIKV) is a mosquito borne-viral infection transmitted by the bite of the daytime-active Aedes mosquito species A. aegypti and A. albopictus. The symptoms of chikungunya include fever and joint pain very similar to Zika and dengue. The disease can be severe, especially for young children and the elderly. Patients can develop a post-acute or chronic arthropathy lasting 21 to 90 days in acute cases, and three months to more than two years in chronic cases (PAHO/WHO, 2017).

Cases as old as 1779 were reported as dengue but may have been chikungunya cases. The lineages of chikungunya divided into two branches: West African (WA) and East/Central/South African (ECSA). The West African strains are more related to small outbreaks locally in Africa. The strains from ECSA lineage are the ones that spread largely through the world. Due to globalization and extensively infected travelers, the strains spread in the Western Hemisphere are diverse (Silva & Dermody, 2017).